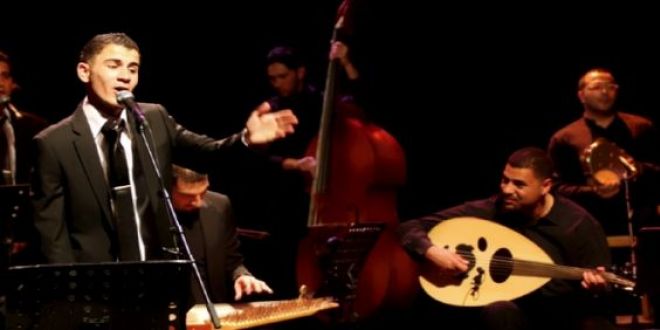 Testimonials from around the world are pouring in for Oday Khatib, the celebrated, star singer of Ramallah-based Al Kamandjati music school, who faces Israeli military trial on Monday, April 8.  (The trial was earlier scheduled for April 3.) As I wrote recently, Oday was arrested March 19 for allegedly throwing stones at soldiers.  As the 22-year old singer from Al Fawwar refugee camp awaits trial in Ofer Prison near Ramallah, his friends, fellow musicians and supporters of Al Kamandjati, founded by Palestinian musician Ramzi Aburedwan, are lighting up social media sites in support and musical witness.

“Oday and Ramzi came to London to perform with me and my group Fifth Quadrant last year,” writes Simon Hewitt Jones, a British violinist who has taught numerous workshops at Al Kamandjati. “His intensely moving singing had a profound effect on audiences in London.  We also took him to Aldeburgh to work with young British musicians, who were astounded that someone so young – someone barely older than they were – could have such an powerful musical voice, and such inspirational artistry.”

“Working with Al Kamandjati in Palestine, it was a joy to see Oday every day,” wrote Mariam Tamari, a Japanese-Palestinian opera singer based in Paris. Mariam, who sang Mozart’s peace plea, “Alleluia Exultate Jubilate,” for the launching of the Palestinian National Orchestra in Jerusalem on New Years Eve, 2010, writes of Oday: “He is truly a noble soul, communicating the warmth of his heart and quiet strength, and with a great capacity to appreciate beauty.”

“Oday is a true Palestinian voice who sears the receptive heart with his song, [which] is absolutely connected to his soul,” writes Peter Sulski, an American violist formerly of the London Symphony Orchestra, and who has taught for years at Al Kamandjati.  “He is a man of peace who would rot behind bars.”

Oday’s father, Jihad Khatib, told Musa Abuhashhash, a field worker for B’tselem, the Israeli human rights organization, that Oday was arrested at Al Fawwar while waiting for a friend he was meeting for dinner. Nearby, Jihad said, some youths were throwing stones, “and when the soldiers chased the kids, it did not come to his mind that the soldiers would go for him.  Otherwise he would have run away.”

Oday’s father, joined by musicians from the U.S., UK, Italy, France, Palestine, and elsewhere, expressed skepticism that Oday would have been throwing stones. He has never been arrested, and has long sought his resistance to occupation only through his singing, “since he was nine years old,” Jihad said.

“He is a very lovely and peaceful boy only interested in one thing: singing,” wrote Sarah Roger, who came to Ramallah from France to volunteer the Al Kamandjati office. “His only aim is to spread love and make people happy thanks to his beautiful voice.”

“His remarkable professionalism, his sweet voice and most of all his deep knowledge concerning teaching music and peace values to the kids, in order to create better human beings for the future, is outstanding and moving at the same time,” declared Luca Francetti and Gunilla Kerrich, husband and wife cellist and violinist, respectively, writing from Italy.  “His contribution to improve a better peace and brotherhood culture is essential.  We really hope that all this talent won’t be wasted.”

Oday’s family has expressed hope that several of the soldiers who chased the youths on March 19 will be willing to testify that Oday was not among the stone-throwers.  This does not appear likely: The conviction rate for such alleged offenses in military trials, in 2010, was about 399 out of 400.

Beyond whether or not Oday was “guilty” of throwing stones is the question of what constitutes legitimate Palestinian resistance to a 47-year military occupation. Al Fawwar, like most Palestinian villages and towns, sits on land surrounded by Israeli settlements.  The camp is in the midst of Area C, under full Israeli military control, which takes up 60 percent of the West Bank.  A central purpose of Israel’s occupation army is to protect the settlers, whose illegal occupation, under international law, remains a towering obstacle to a just settlement between Israel and the Palestinians.  For generations of Palestinian youths, throwing stones has formed the core of their efforts at expelling the occupying army.  Stone-throwing was at the heart of the first Palestinian  intifada, which forced Israeli leaders to the negotiating table.  (The Oslo agreement they forged with Palestinian negotiators proved to be disastrous; nevertheless, there was a palpable since during the first intifada that the stone would lead to Palestinian liberation.)

I have spoken with several American officials in recent days regarding Oday’s arrest.  The Americans have provided funds to Al Kamandjati to help support its past summer music camps, where Oday was featured prominently.  Thus I thought they would take an interest in Oday’s case.  My inquiry — whether the American government would at least inquire about Oday’s incarceration — was met with virtual silence. “I just don’t have anything for you on that,” U.S. Embassy spokesman Geoff Anisman told me four or five times from Tel Aviv.  Another American official in the region was only slightly more forthcoming:  “There’s a system in place,” the official said, referring to Israel’s system of arrest and incarceration.

Yes, there’s a system in place:  A military court system in which 99.74 percent of the accused are convicted.  The sentence for adults convicted of throwing stones “[a]t a person or property, with the intent to harm the person or property shall be sentenced to ten years imprisonment,” according to Section 212 of Israeli Military Order 1651.  Some of the convicted “adults” are as young as 16; many of them plead guilty in exchange for a lesser sentence.  A significant portion of the incarcerated are children — 7000 in the last ten years, according to a UNICEF report, which states: “the common experience of many children is being aggressively awakened in the middle of the night by many armed soldiers and being forcibly brought to an interrogation centre tied and blindfolded, sleep deprived and in a state of extreme fear. Few children are informed of their right to legal counsel.”

Adults like Oday know full well that they could receive a lengthy prison sentence. Currently more than 4,700 Palestinians are being held in Israeli prisons.  Oday’s case is no more or less unfair than thousands of others; it simply sheds more light on the system that’s in place.  And it prompts dozens of Oday’s friends and fellow musicians to write in his defense:

“Oday is an exemplary young man of noble, peaceful character,” writes Clemency Burton-Hill, a British violinist who has performed with the West Eastern Divan Orchestra, founded by the Israeli-Argentine conductor Daniel Barenboim and the late Palestinian intellectual Edward Said.  “Moreover he is the sort of young Palestinian that the Israelis should be supporting and celebrating, not imprisoning, for it is empathetic, inspiring people like Oday who might one day help to forge a lasting peace between Israel and the Palestinians. If Oday spends the next ten years or even ten months, weeks or days in jail, that prospect of that peace will be further jeopardized. I am sickened to my heart at the prospect of what such a jail term might mean, both for Oday, his family, his friends and all who have been touched by his music.”

Nowras Ibrahim, an Al Kamandjati-trained Palestinian bass player who is now studying in France, writes that Oday “has been more than a brother to me. We shared special moments together, discovering the world by spreading our music to people.  Oday is known [for] his sensitivity.  He sings from his heart.”

Julia Katarina, the British Mezzo-Soprano who put her opera career on hold to teach voice lessons at Al Kamandjati for three years, writes of Oday:  “He is very generous with his art, and just loves singing beyond all else! He is a true singer, and I imagine the only way he is surviving prison is by singing. I hope he sings in the military court,” Julia writes, because on April 8, if Oday’s accusers can find “an ounce of humanity in their hearts, they will release him.”

Note:  This article will be updated with additional testimonials.

Tweet
Categories: Articles and Commentary, Daily Life in a Land of Conflict