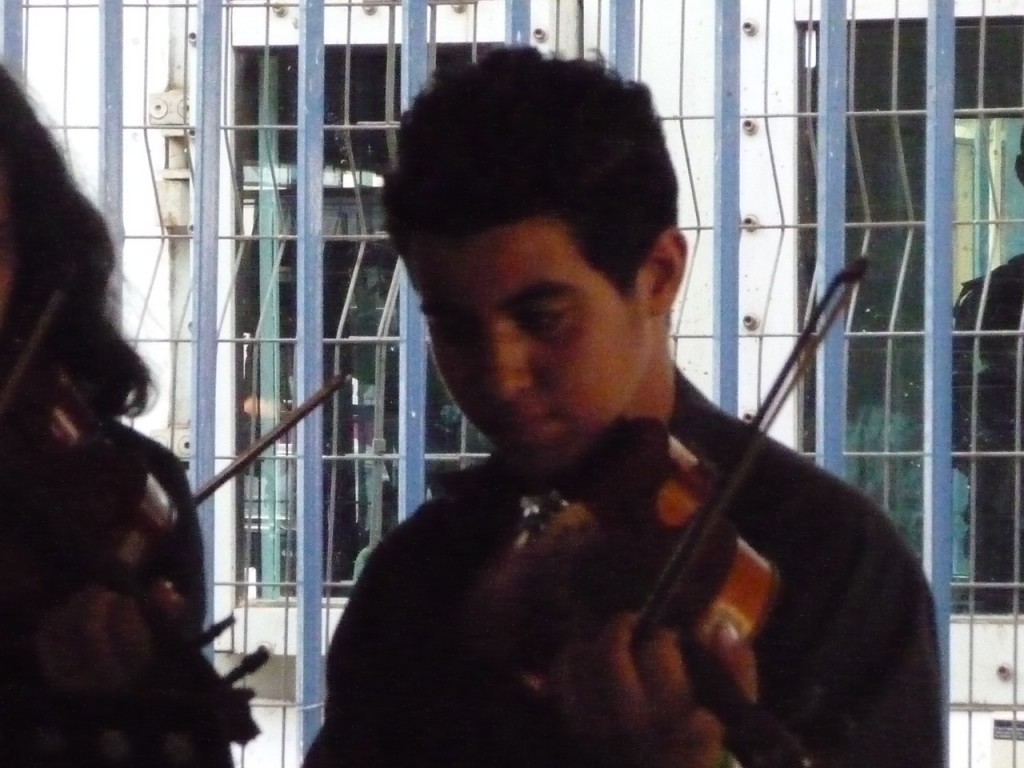 Rashed Zarour, 12, says he saw Israeli soldiers dancing during the Al Kamandjati youth orchestra performance at the Qalandia military checkpoint on June 23rd. But he says, "Whether they danced, or were angry, I don't care. I'm just there to play music for my country."

The other day two dozen Palestinian children, armed with violins, cellos, woodwinds and brass, confronted Israel’s occupation at the Qalandia military checkpoint. [Listen to Mozart's Symphony No. 6 from Qalandia.]  A grim barrier of confinement was transformed, if only for a short time, into a space of assertive joy, as the young musicians played Mozart’s Sixth Symphony in F Major, and three selections from Bizet, just a few feet from machine-gun glad conscripts of the Israel Defense Forces.  Now comes word of dancing soldiers.

The extraordinary checkpoint concert, by the Al Kamandjati youth orchestra under the energetic direction of Jason Crompton, was a musical high point in the lives of the players, from 13-year-old Alá Shehaldeh, who declared the Qalandia performance to be “the best concert of my life,” to veteran UK jazz and classical violinist Helen Sherrah-Davies, who said Qalandia was “the best gig I’ve done.”

Part of the reason for this exuberance:  This confrontation of a military force amounted to a “musical intifada,” in the words of Al Kamandjati founder Ramzi Aburedwan.  “The soldiers were no match for our instruments,” said 16-year-old trombonist Majd Qadi.

Most witnesses seemed to see what I saw:  That at first the soldiers seemed to ignore the music; and then, out of curiosity, began to emerge from their small inspection stations to listen and watch.  At first, “they were angry,” speculated Alá, recalling the moment.  She sat with a fellow musician at a picnic table at Al Kamandjati’s annual summer music camp in Talitha Kumi, near Bethlehlem.  But Alá and others started noticing other things:  At least two soldiers, they said, seemingly taken aback by the spectacle, started taking pictures with their cell phones.  Others were laughing, enjoying the moment.  A couple of soldiers, said the 15-year-old violinist, Lone Khilleh, “were clapping for us, too.”

And, according to four of the young Palestinian musicians, several of the soldiers were dancing. 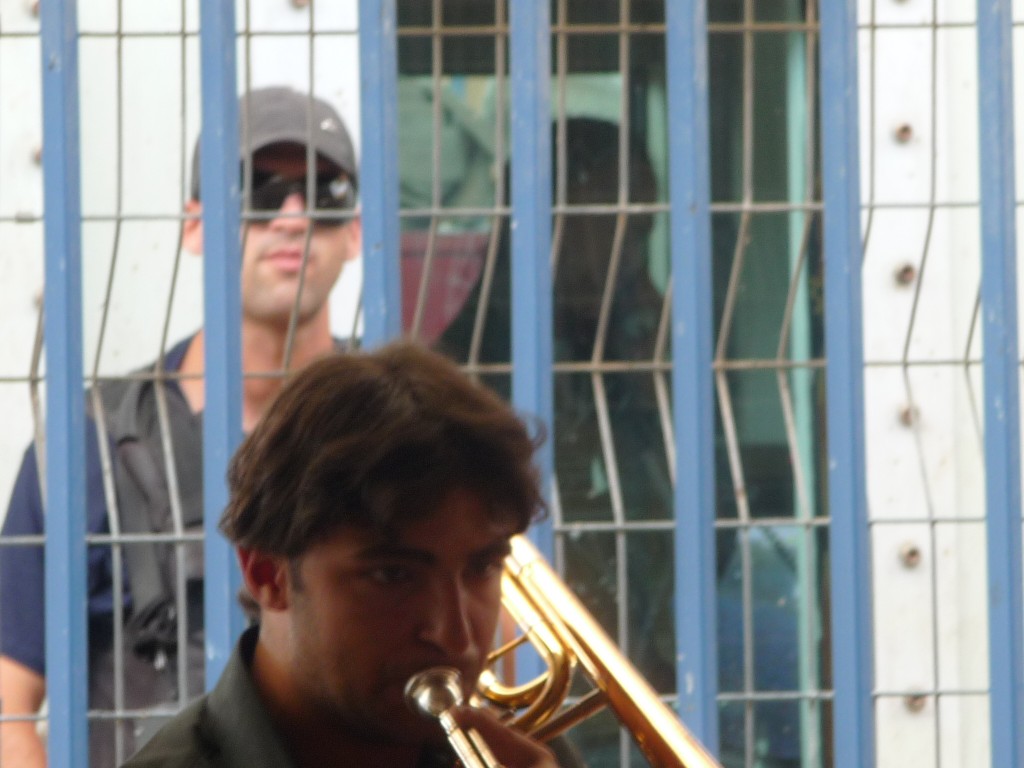 Majd Qadi, 16, played Mozart and Bizet at Qalandia. Afterward, he said, "It might be somehow similar to what happened to India at the time of Gandhi – the nonviolent resistance."

Though Ramzi was skeptical of such claims — “This is not dancing music” – three other Palestinian members of the youth orchestra insist on what they saw.  “I saw two soldiers dancing,” said the teenage oboist Areej Khaliliyeh.

So it appears there were dancing soldiers at Qalandia.

And, you may ask:  so what?  What does that matter?  Does it shift the power dynamics between Israeli army and the Palestinians?  Does it restore any land taken by settlers?  Does it make the occupation any less damaging?  Do dancing soldiers bring a just and peaceful resolution even one inch closer?

“I don’t care about them,” said Rashed, who will soon turn 13.  “Whether they danced, or were angry, I don’t care.  I’m just there to play music for my country.  That’s all.  To make my people happy.  To make Palestinians happy.”

I expected a similar answer from Majd, the 16-year-old whose family was expelled from the village of Beit Nuba during the Six Day War 44 summers ago.  More than 200,000 Palestinians lost their homes then, including the residents of Beit Nuba and two neighboring villages, which were razed to the ground after the war.  On the site of one of them, Imuas, sits Israel’s “Canada Park.”  There is almost no trace of the village.

“Before that war my grandfather was a very rich man who owned one-ninth of the total lands of the village.  After that my family became poor.  My father was talking to me a lot in the last years about how hard did he suffer to live.”

So it was striking to hear Majd’s reflections on the meaning of the dancing soldiers.

“I’m thinking about, if we could make them dance, that means that we probably were able to bring out some of their humanity that was lost under the guns,” he said, as light filtered down through tall spindly pine trees at the summer camp at Talitha Kumi.  ”It might be somehow similar to what happened to India at the time of Gandhi – the nonviolent resistance.”