Children and their “musical intifada” prevail at Qalandia 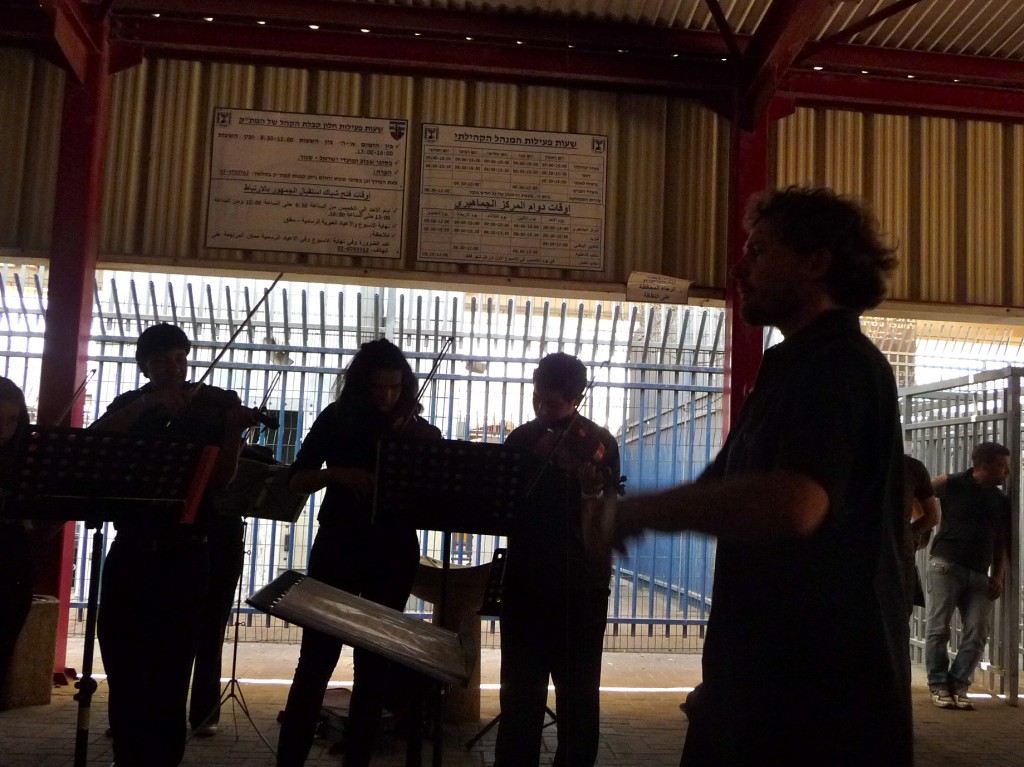 Jason Crompton, conductor of the Al Kamandjati youth orchestra, silhouetted in front of the bars at Qalandia military checkpoint. (To listen, click on "Symphony No. 6," or near "Bizet's Farandole," below.)

In truth the operation was not without risk. Jason Crompton, an American pianist who conducts Al Kamandjati’s youth orchestra, and a couple of his colleagues had come to Ramzi with the idea.  They’d heard about a similar Al Kamandjati event at the separation wall a few years ago.  But they all knew that Qalandia, defined as “Area C” under the ill-fated Oslo accords, is under full Israeli military control.  Setting up a Palestinian orchestra in an Israeli military zone – just steps from the steel corridors, revolving metal gates, and X-ray machines where Palestinians submit themselves for inspection – was an uncertain prospect.  How would the soldiers react?  If they forced the children to stop playing, and Palestinians watching this objected, what would happen next?  Would the situation get out of control?

A few Al Kamandjati staffers were nervous, and a couple of parents had called with their concerns.  Nevertheless, everyone seemed on board with the plan:  It was a way to confront the 44-year-old occupation by reclaiming space through music.

The operation began swiftly and according to plan.  At about 11 a.m. in Ramallah, the 30-some members of the youth orchestra began piling onto the bus, carrying their violins, cellos, trombones and clarinets.  Into the belly of the bus went snare drums, cymbals, timpanis, backpacks and sheet music.

We rolled south out of Ramallah.  Ramzi stood at the front of the bus and faced the musicians.

He designated a half dozen of the older students and staffers for early logistics:  As soon as we arrived at Qalandia, these six would quickly assemble the music stands and mount the large percussion.  For the rest, “you stay on the bus.  Please don’t go out.  We don’t want to attract any attention.  Once the stands and the big instruments are ready, everybody come with his music, his instrument, and we’ll start immediately.  If you can tune on the bus, that would be amazing.”

What if the soldiers come and order the children to stop playing?  “We don’t listen,” Ramzi said.  “Exactly as if they are not there.  If they say something on the loudspeaker, we don’t listen.  We produce sound.  That’s it.”  He added, hopefully:  “Normally at this time there will be more people there.  Which is gonna make it more safe, yani.”

Just past Lovely Toys, the wall and checkpoint towers came into view.  The bus swung left through a roundabout, and then right, into the parking lot.  Ramzi ran off to find Jason, who had come in a car with two dozen music stands.

The early logistics team assembled the percussion and music stands, according to plan.  There they stood, black metal sentries in the hot sunlight outside the “passenger terminal,” out of the range of military surveillance cameras.

Nearby, through the open windows of the bus, came the sounds of children tuning their instruments. 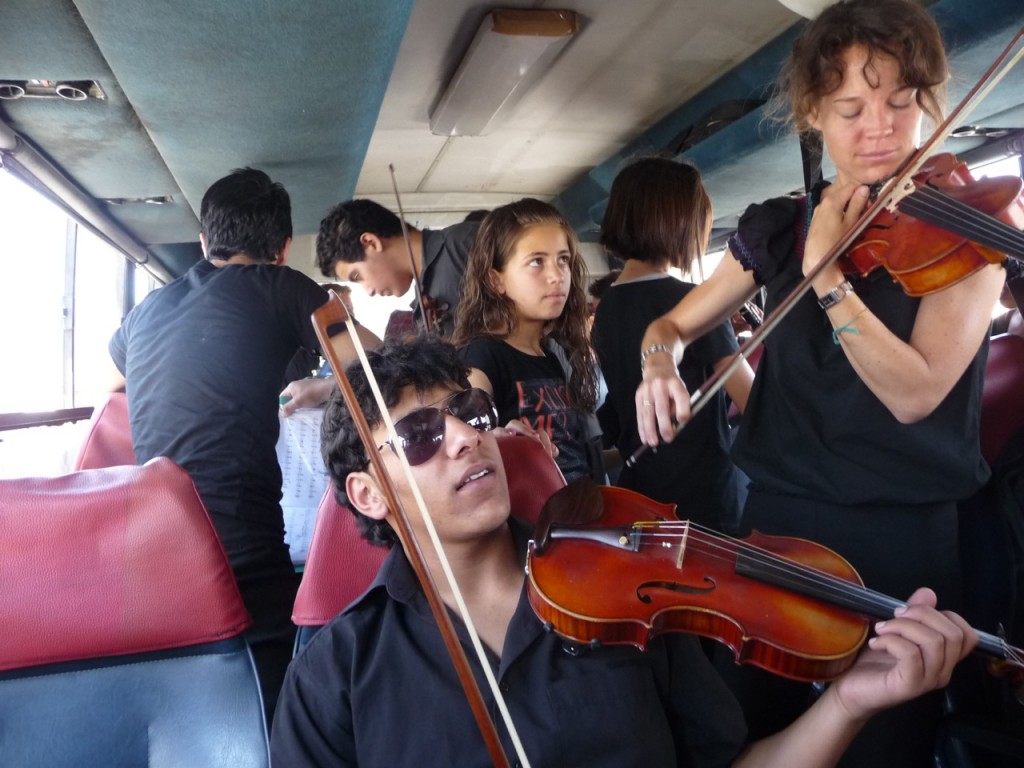 Tuning on the bus: Mahmoud Karzoun, 18, and members of the Al Kamandjati youth orchestra, moments before they played at the Qalandia military checkpoint.

And then it started.  In two lines, from the front and back bus doors, the young musicians filed out, their instruments out of their cases and ready.  Ramzi directed them to the side of the building, where they were to grab a music stand and enter the terminal.

They strode determinedly past the red metal benches and toward the far corner of the terminal, in front of a long row of blue horizontal bars.  On the other side, in a small building behind bulletproof glass, soldiers seemed unaware of the unfolding musical drama.

Now Jason stood, arms raised, before the musicians – about 25 kids, and perhaps 8 teachers.  The orchestra was poised, bows and brass in position.

The sound of Mozart’s Symphony No. 6 in F Major filled the terminal. 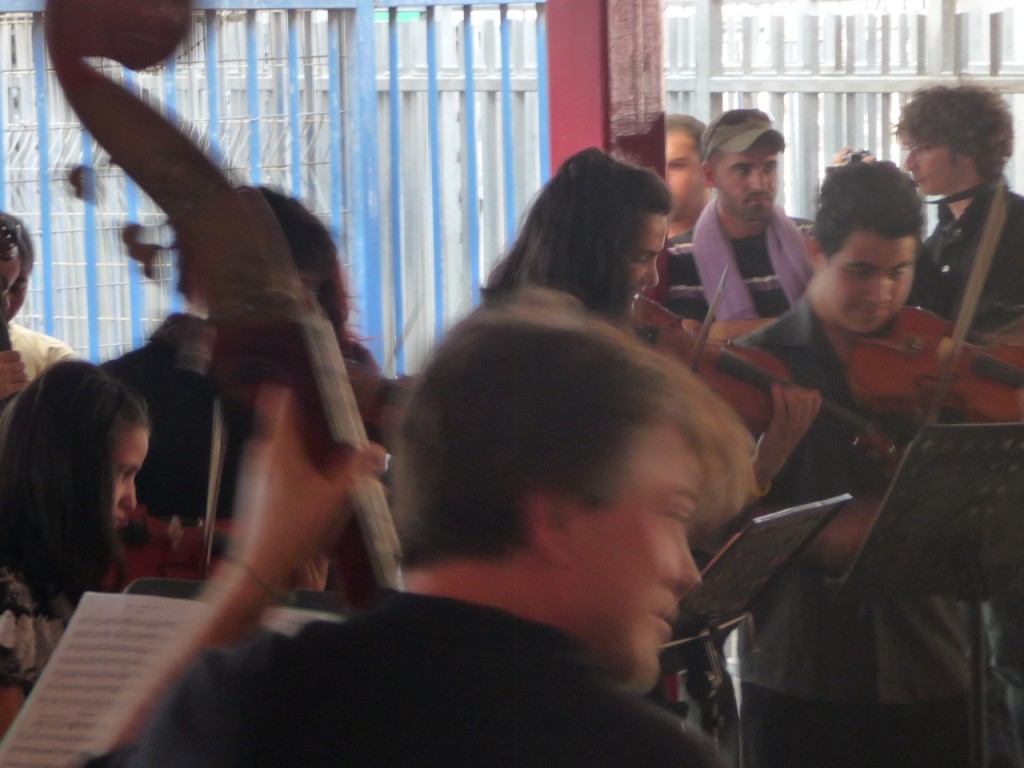 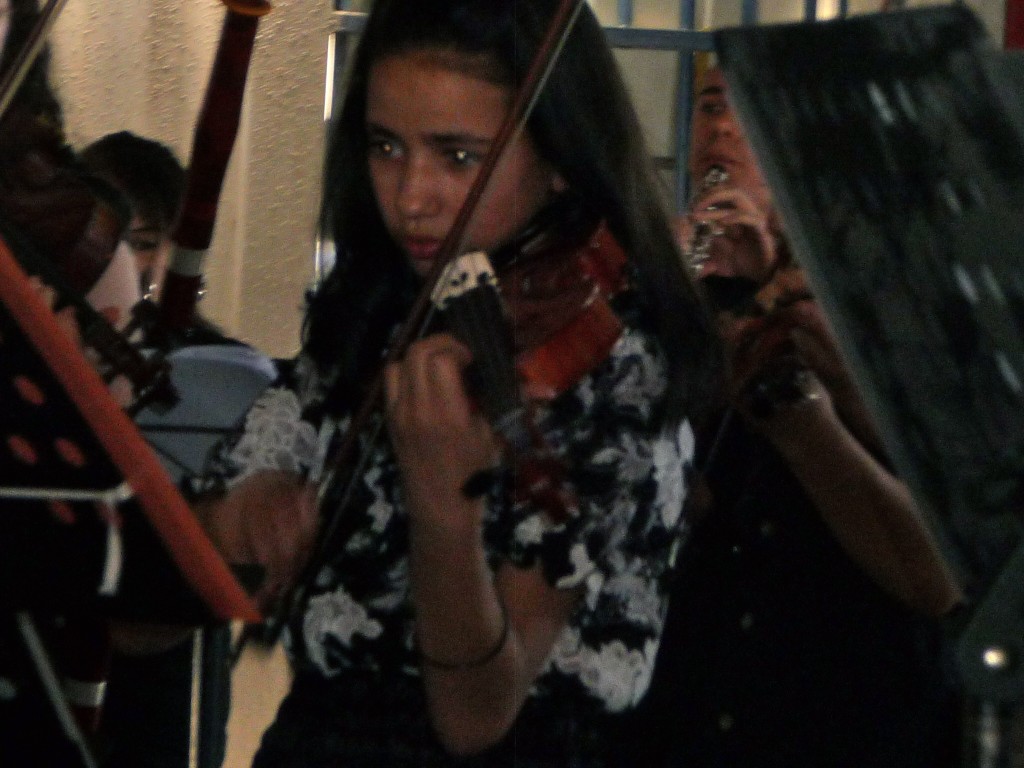 Alá Shehaldeh, 13, a violinist in the Al Kamandjati youth orchestra, playing Mozart at Qalandia on June 23. "This was the best concert of my life," she said afterward. 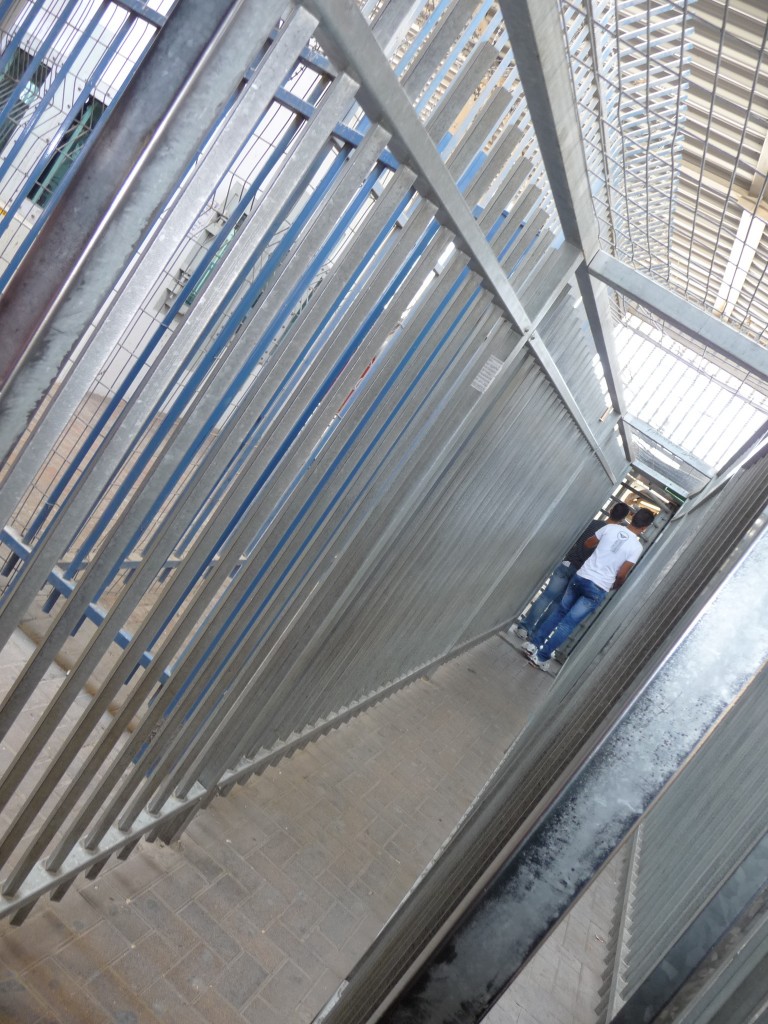 As Mozart played at Qalandia on June 23, the crossing slowed to a trickle.

Helen Sherrah-Davies, a visiting violinist from the UK, remembers having to fight back tears as she played.  “I wonder how many times joy has entered that space,” she would muse afterward.

At first the soldiers seemed to pay no attention.  But as the Mozart symphony built –  Allegro, Andante, Minuet, and the Allegro last movement – they started to take notice.  By the time the orchestra launched into Georges Bizet’s Dance Boheme from Carmen #2, a soldier appeared, looking out through the bars. 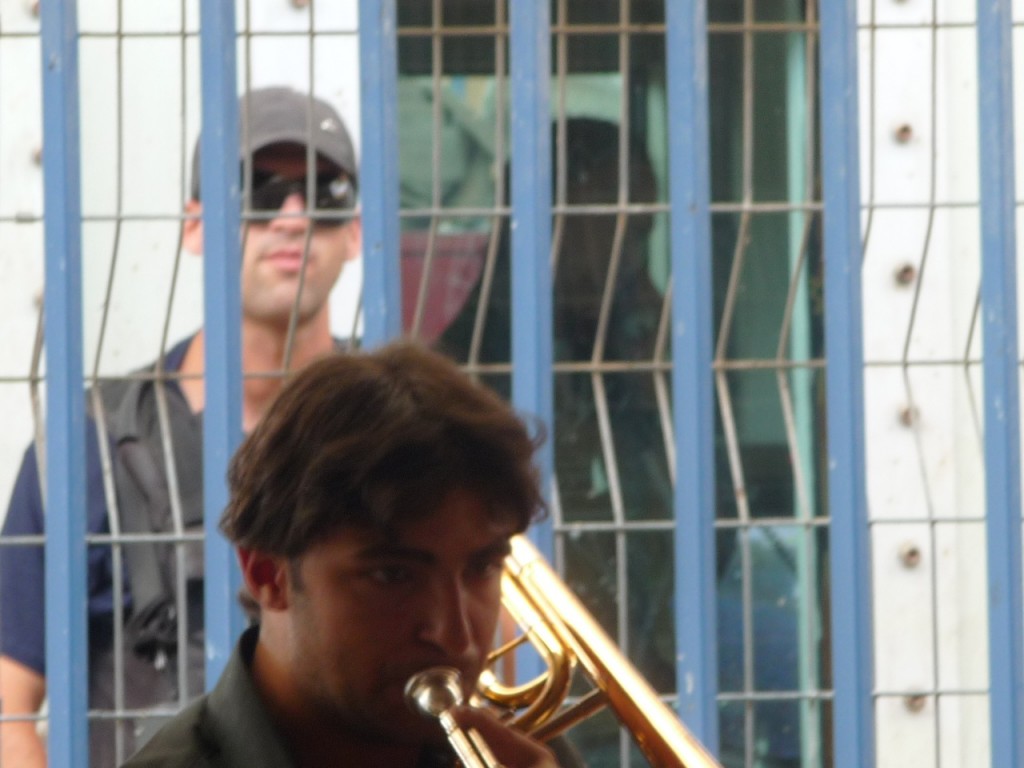 He was joined by a second, then a third. One of them got on his radio. They didn’t seem to know what to do.  Now Bizet’s Habanera (also from Carmen) was echoing through the terminal.

This was all rather out of the ordinary.  But the soldiers seemed to be aware that trying to stop the music would have created a mess –  and an opportunity for a global Youtube event. 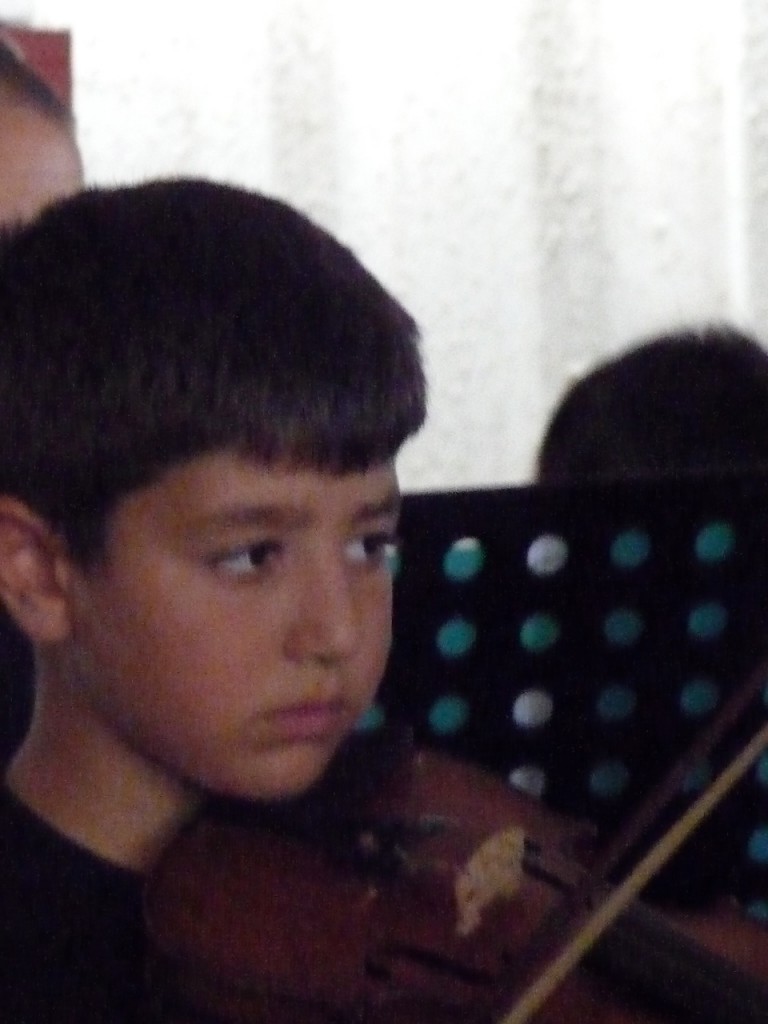 Wasim Harbi, 9, is the youngest member of the Al Kamandjati youth orchestra

In the end, the orchestra played on, reprising ﻿﻿Bizet’s Farandole [listen here: ﻿bizet2] from L’Arlesienne Suite No. 2, to triumphant applause. [hear more Bizet, with applause: bizet2ptwithapplause]

For a long moment, the cheering surged.  A feeling of euphoria hung over the reclaimed space.  The players looked at each other in amazement.

Sweat beaded up on Jason’s forehead, the result of his energetic conducting.  Now he was facing the cameras.  “Do you think the music can make a solution for peace between the nations?” a Palestinian reporter wanted to know.  “I wish it were that simple, really,” Jason said with a laugh.  “I don’t know if it can bring a solution but I think it can bring a lot of good things to people.  It brings really great things to these kids here.  And to be a part of that, I can’t ask for anything more, really.  It’s amazing.  To play here today – I feel so good.”

Back at the bus:  a sense of jubilation.  In the parking lot, Jason went window to window, jumping up to yell gleefully to the kids, who responded each time with whoops and screams. 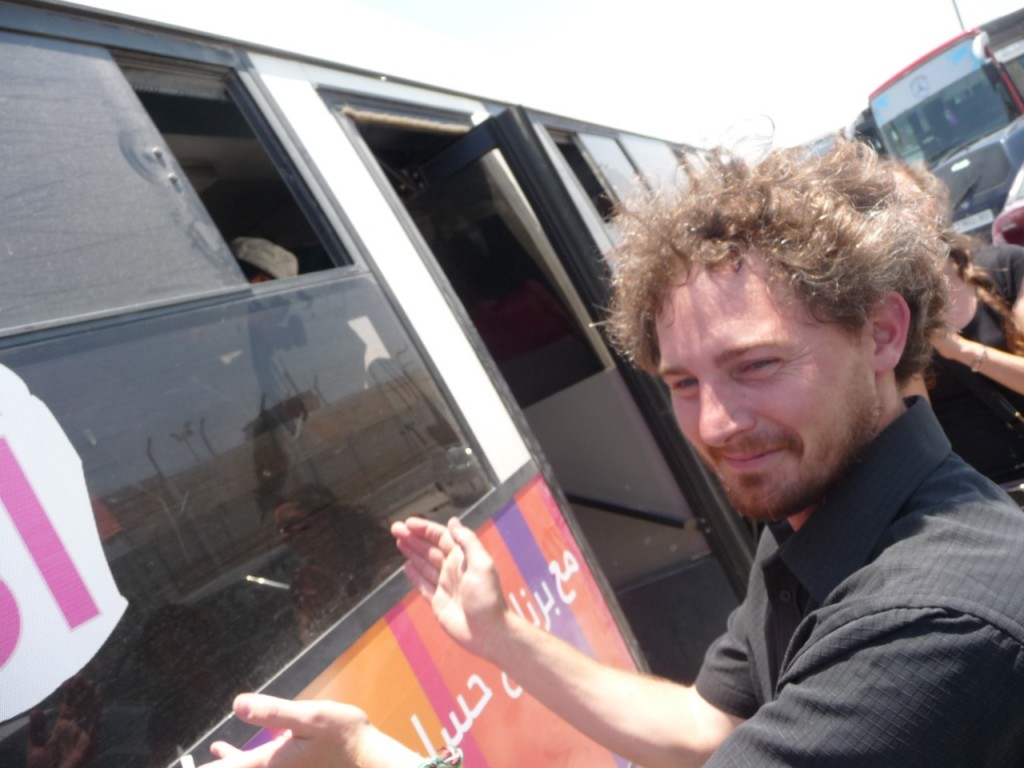 Jason Crompton celebrates at the bus in the Qalandia parking lot, moments after the youth orchestra finished their concert at the checkpoint.

We headed back to Ramallah, to the sound of much singing, tabla and oud. “This was the best concert of my life,” said Alá Shehaldeh, a 13-year-old violinist.  Not so long ago, at a checkpoint, Alá was forced to open her violin case and play a song before the soldier would let her pass.

Now, Alá looked out of the bus window at the landscape of Palestine, a peaceful and uncomplicated smile resting on her face.