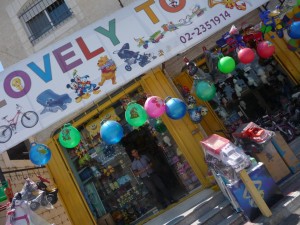 Lovely Toys is the key to your checkpoint destiny.  It’s the kids’ store, brightly festooned with stuffed tigers, scooters, beach balls and racing cars, that sits about 200 meters from Qalandia, where the 25-foot-high wall, watchtowers and military checkpoint divide Jerusalem from Ramallah.  The toy store serves commuters, and the occasional mom and her shebab at the Qalandia refugee camp across the chaotic street, reports owner Wisam Afaneh.

If your taxi or service (sir-VEECE, a collective van) gets snarled in traffic by or before Lovely Toys, you can count on a long wait in your car going south, or walking through the steel and concrete chambers on your way to Jerusalem.  If on the other hand you breeze past Lovely Toys – and the boys peddling bottled water and verses from the Quran, and the squeegee men wiping the windshields of reluctant drivers, and the huge chunks of broken concrete and scattered plastic debris, and the murals of a young Yasser Arafat and the handcuffed Marwan Barghouti along the wall, and the overflowing dumpster where a dead cat has been lying belly-up, paws reaching for the sky, for the last couple of weeks – then you might just get through quickly and make your appointment in the Holy City on time.

That is, if you have a permit, or, like me, an American passport with the diamond-shaped Israeli visa stamp.  (U.S. citizens with Palestinian heritage often get the square-shaped visa, along with the unambiguous “No Entry Into Israel.”)

The other day I walked through the checkpoint with a couple of American musicians, violist Peter Sulski and pianist Eric Culver, part of the annual Fete de la musique sponsored by the Ramallah-based Al Kamandjati music school.  We were on our way to a performance in the Old City.

It was late afternoon.  The road was like a parking lot.  We bailed from our taxi in front of Lovely Toys, trekked past that rigor mortis cat, and cut through a “pedestrian terminal” filled with empty red benches, scattered trash, and a guy sitting in front of a long row of metal bars, selling water from a picnic cooler.  From there we found our small corridor – a two-foot-wide, seven-foot-high steel cage that led to a floor-to-ceiling turnstile.  On the other side, about 50 people crowded in front of another “iron maiden.” Besides us, it seemed everyone was Palestinian – either with a Jerusalem ID or a special permit to pass for the day.

Though it was “rush hour” – about 4pm – only one of the five entrances was open.  So we stood, all clumped in one group, waiting, each in our own thoughts.

A melody in a minor key played in Eric’s head – the soprano aria from Bach’s St. John Passion.  It seemed appropriate for the setting.  This was his first time crossing like this, and it reminded him of his experience decades ago at the Berlin Wall.

Peter, a veteran crosser, had his thumbs on his mobile phone, making arrangements for a taxi to pick up an arriving colleague at the Tel Aviv airport. Still, he thought, imagine doing this every day. “It stops me from coming into Jerusalem for any other reason than to do what is necessary,” he would say later.  “Which I think is the point, isn’t it?”

Of course, we were the lucky ones with permission to pass – most Palestinians only dream of Jerusalem, as it becomes to them an imaginary city.  But Peter’s right: As Palestinian lands are confiscated in East Jerusalem, and Jerusalem IDs are routinely stripped, the energy of Arab East Jerusalem is dwindling, replaced by a vibrant life in Ramallah.  Even those with the right to live in Jerusalem are now choosing to make their home on the other side of the wall, in the emerging de facto Palestinian capital.

Not so long ago, this land was much more open.  ”Back in 96 it took me, Bethlehem [south of Jerusalem] to Ramallah in 25 minutes,” Peter said, breaking our reverie.   That trip that now takes two or three times as long.  “BMW 318.  Clanky carburetor.  Oh man.”

“Yeah the 3 series was brilliant.”

Eric pointed to a stray cat parading along the wall behind us.  Beside us, Palestinian workers in yellow vests swept up cigarette butts.  “Keep the terminal clean,” instructed a sign above them.

Every few minutes we’d hear a loud click, and three or four people filed through the high turnstile and through an airport-style security check.  On the other side, through thick, green-tinted glass, bored-looking soldiers sat in a spartan room in front of computer terminals.  One at a time, we’d press our visas or IDs up to the window, pick up our bags on the conveyer, and click through two more turnstiles, and into the light on the other side of the wall.

It was nearly dusk by the time we reached the Old City.  At the Center for Jerusalem Studies, in a building and courtyard that dates back to Crusader times, plastic chairs were set up along the stones.  A half moon rose behind a rooftop barbwire fence; next door, perhaps 200 feet away, the call to prayer drifted up from Al Aqua Mosque.

Kids squirmed and whispered frantically in their seats; a child called for her mom across a stone wall; someone slammed closed the metal doors of his shop.  But the players carried on, their lovely music floating into the night sky above the Old City.

After the concert, the group headed back to Ramallah. I lingered a bit, sitting over a glass of wine with a friend under the grape-leaf lattice of the Jerusalem Hotel.  Then I hopped a taxi back to Ramallah.

The road was early empty.  We passed through Qalandia without stopping.  Just north of the wall, Lovely Toys stood quiet and dark.