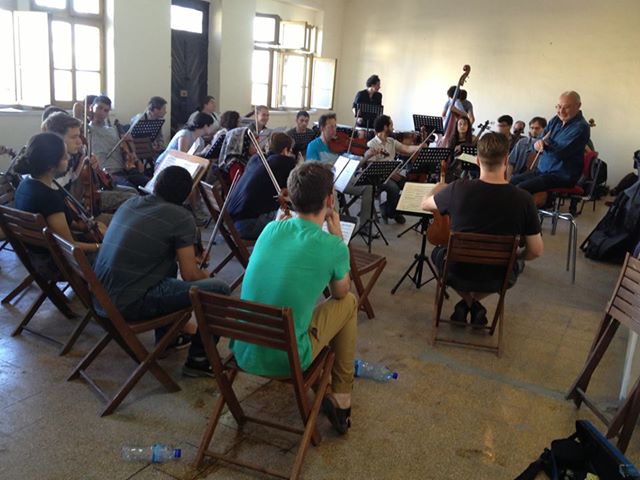 The profound amid the quotidian: Al Kamandjati's Ramallah Orchestra, rehearsing Beethoven and Mendelssohn in Old Ramallah, for a series of concerts beginning June 29 in Jerusalem

I arrived in Ramallah a week ago, limping heavily, and right into another story of Palestinian hospitality. I had torn a calf muscle doing exercise in my Jerusalem hotel room, and, after managing to get on the #18 minibus to Ramallah, then hop a cab to the flat I’m renting here for two weeks, I met my landlords – three generations of an old Ramallah family who live in the flats above and below the one they were renting me.  This is my sixth trip to Palestine since 2009, all for reporting and research for my new book, about making music under occupation in Palestine.  Every time I come, I encounter small, profound kindnesses: surprise in the quotidian life.

When he saw me limp up the stairs, Ziad, a young doctor, provided a quick assessment of my ailment; then with a look of concern, he asked me if I needed any groceries, since I wouldn’t be able to walk to get any. Well, yes, thanks, I said. Make a list, he said. Then he told me he knew an orthopedist at the end of the block; would I like him to try to get an appointment? Well, yes, thanks, I said again.

Ziad went off to see the doctor and came back a short time later: the doctor was about to leave his office but could see me now. Take my arm, Ziad said, as I hobbled down the block. In moments the orthopedist had diagnosed the muscle tear, given me a shot in the rear, prescribed two medicines and a support sleeve, and told me I’d be better tomorrow. Then he and Ziad discussed, in Arabic, whether it was right to charge me, since I was a visitor. Finally the doctor accepted 100 shekels, or about $30.

Ziad helped me walk back hom home and then set off for provisions.  A short time later he arrived with my coffee, milk, fruit, bread, and medicines.

I had scarcely moved a muscle, but now was supplied and cared for by people who, moments earlier, had been complete strangers. They put me on the mend. And today my limp is gone.

The whole experience was awesome, of course, but after 19 years of traveling to Palestine, not surprising.