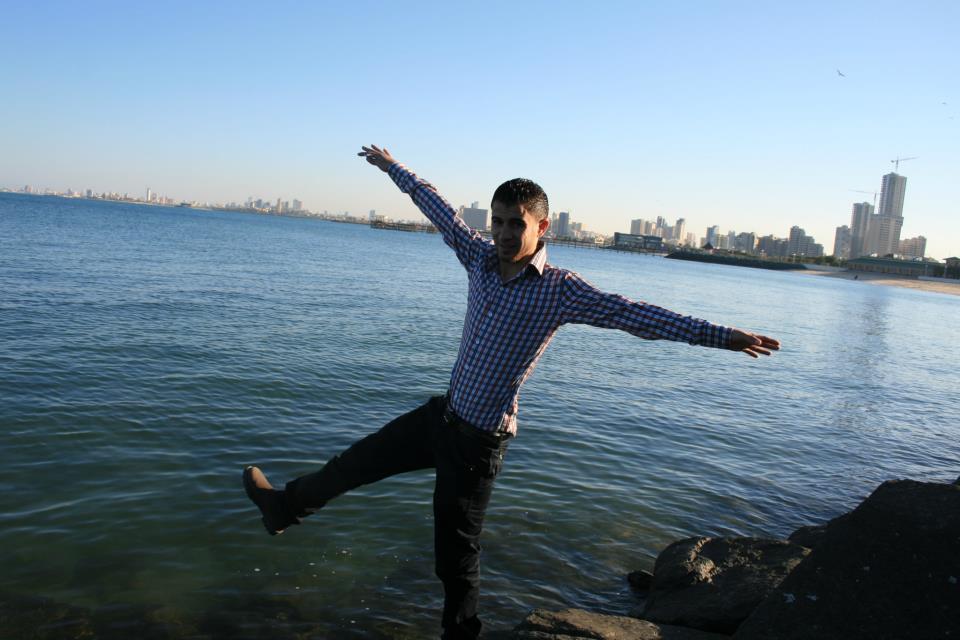 Oday Khatib, the acclaimed Palestinian singer from the Ramallah-based Al Kamandjati music school, walked out of an Israeli prison a free man this week.  Oday was arrested on March 19 at Al Fawwar refugee camp near Hebron, and sentenced to three months in prison for allegedly throwing stones at Israeli soldiers.

Despite the joyful return with his family at Al Fawwar, and the experience of tasting his his mother’s oven-baked chicken after nearly three months of prison food, Oday, 22, expressed mixed feelings about his release.

“My happiness was not complete,” he said during a telephone interview from the family home at Al Fawwar on Thursday, which was interrupted repeatedly as well-wishers continued to stream into the house.  “I felt like I was abandoning the guys.  I felt guilty.  I was ashamed for only spending three months.”  Many of the other men in the two prisons where Oday was incarcerated had been sentenced to much longer terms.  Stone-throwing carries a sentence of ten years under Israeli Military Order 1651, and the conviction rate for all charges against Palestinians by Israel’s occupation authories is 99.74 percent, or about 399 out of 400.

Oday maintains that on March 19 he was not throwing stones, but rather standing near a group of boys who were.  Nevertheless he was arrested by Israeli soldiers, beaten “really badly,” and charged with the crime of stone-throwing.  For two months Oday and his lawyer maintained his innocence to the military authorities, reminding them that he was a singer, had never been arrested, and was not interested in throwing stones.  “I have my life and my work to worry about,” he told them.  Oday has long maintained that his resistance to Israel’s occupation would come through his music.  During the trial, Oday said, “soldiers and witnesses lied” about his alleged crime.  Faced with the prospect of a long prison term, the singer, who has recorded and performed across Europe and the Arab world, agreed to plead guilty in exchange for the three-month term.

“I was ashamed that I was the youngest and had the shortest sentence,” among his fellow prisoners, Oday said.  “When they would ask how long I am staying in prison I would only say three, without saying it is only three months so they would think it is three years. I started crying when I left.  I was not that happy.

“When all my family and friends met me at the checkpoint,” Oday added, “I told them that they did not have to do all of this. I mean I barely spent any time in prison.”

During Oday’s relatively short  stay in two Israeli prisons – in Ofer, near Ramallah, and Ramon, in the Negev Desert – he entertained his fellow prisoners with his powerful, mournful voice, which has captivated audiences from Al Fawwar to the Gulf to Paris, going back to the days when Oday was barely a teenager, and still a boy soprano.  “I tried my best to change the atmosphere of the prison and make a pleasant mood for everyone,” Oday said of his time as a prisoner. “I started singing for them and telling them that we should deal with it as a summer camp, not as a prison, to lighten things up.”  This also picked up Oday’s spriits, to a certain extent.  “It helped relieve some of my suffering, but at the same time,” because of the sad themes he sings about, “it brought me back to suffering.”

Now that he’s free, Oday is suddenly able to make simple plans, like attending the birthday party of Hussein Aburedwan, son of Ramzi Aburedwan, founder of Al Kamandjati, and his wife, Celine Dagher.  Hussein turns four on June 10, and told his mom he wanted Oday to come to the party.  Oday also plans to travel to France for a singing gig, attend Al Kamandjati’s international summer music camp in Ramallah in July, and consider entering the “Arab Idol” singing competition.  “And to get engaged,” he added.  “There are some plans for that.”

Before all of that, however, Oday Khatib plans to visit the families of some of the men he spent time with in prison. “I promised some of my friends,” he said.  “They also asked me to write songs for prisoners since there are not a lot of songs about prisoners.”