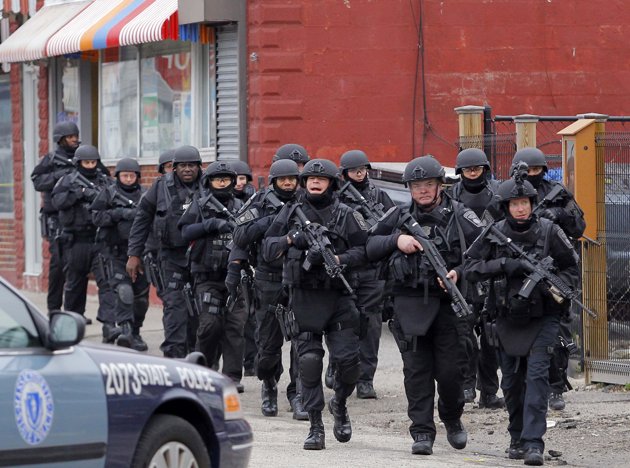 Nearly lost amidst the relief, celebration and flag-waving following the arrest of Dzhokhar Tsarnaev was the seemingly complete acquiescence to a martial law-like state in Boston.  Yes, the lockdown was for but one day; yes, horrible things had just gone down. But shutting down an entire city to search for one man? Yes, he is suspected of having just committed heinous crimes.  But as New Yorker writer John Cassidy asks, “does that justify locking down an entire city?” How outrageous would this have seemed on September 10, 2001? Among the initial under-examined questions, then, from the imposition of a quasi-military state in Boston:

1) Since the authorities knew the suspect was in Watertown, a sliver of the Boston area, why was it necessary to shut down the entire city, including its transit system, universities, airports, and hundreds of streets nowhere near where the suspect was known to be hiding?

2) Why was it necessary to deploy tanks, military assault vehicles, helicopters with heat-seeking “forward-looking infrared devices,” and to, overall, encourage a siege mentality that included what amounted to police death threats against journalists on the scene?

3) If the point was to keep people inside in order to find the suspect (as per the shelter-in-place order from Gov Deval Patrick), how successful was that strategy, given that the suspect was found only after the ban was lifted, and a Watertown citizen went outside and found blood on the tarp of his dry-docked boat?

UPDATE: Since my original post I’ve received some criticism, including from friends, essentially asking if someone who wasn’t there can make such judgments.  First, I don’t claim to have any answers, only to be raising what seem to me to be legitimate questions.  Beyond that, I have this heartfelt response: Yes, the fact that I wasn’t in Boston could be in part a disadvantage, since I wasn’t part of the collective fear that gripped Boston in these recent days, nor the sense of solidarity that bonded the community to the first responders. A photographer friend of mine pointed to an image he saw of a heavily-armed, black-clad policemen, looking like something out of a science fiction movie, carrying two gallons of milk to a housebound family.

So yes, I acknowledge that not being in Boston means I am missing some of the emotional power of what has happened in recent days.  But that is also an advantage, because some of these questions about civil liberties in a time of siege are easier to ask from afar.  And I am, to say the least, not the only one who’s asking them.  My childhood friend Arun Kapil, an American professor in Paris, posted this on his blog, Arun With A View, in which he quotes the following from the New Yorker’s John Cassidy.  Cassidy’s post is titled Terrorist hunt [sent] America over the edge.”

From one perspective, I suppose, [the lockdown] was just a sensible precaution. During the overnight shootout, many details of which remain unclear, one police officer had been killed and another one had been injured. The police believed Dzhokhar to be armed and dangerous. But does that justify locking down an entire city? America is a violent place. Practically every day, somewhere in the country, cops are looking for armed and dangerous men who have just killed one or more innocent members of the public. But when a gunman runs amok in East L.A., say, they don’t close down Brentwood or Santa Monica. The very thought is absurd.

Ah, you may say, Tsarnaev wasn’t just an ordinary criminal or lunatic; he was a terrorist, and, according to some reports, he had one or more explosive devices, possibly including a bomb vest. Now we are getting to the crux of things. Whenever the word “terrorist” is mentioned in this country, reason tends to go out the window, and many other things go with it, too, such as intellectual consistency, a respect for civil liberties, and a sense of proportion.