Signs of strains between secular and Islamist forces have been showing for months.  But both sides were to be represented in Friday’s mass demonstration.  Between 800,000 and a million people were expected. 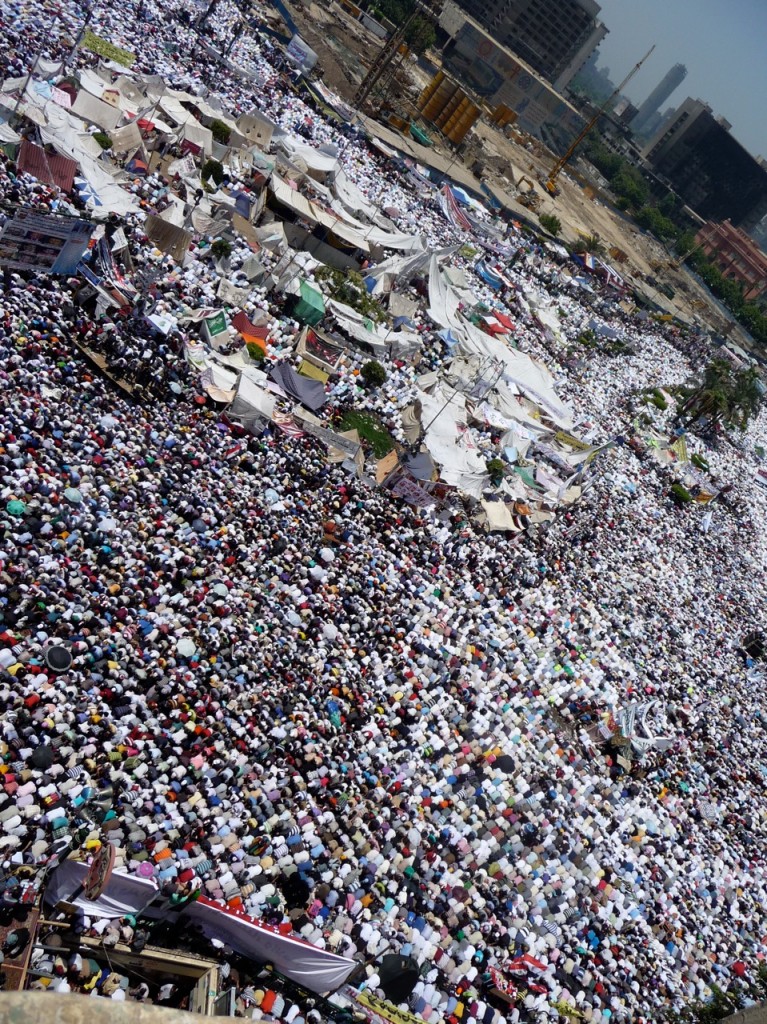 After midnight the Cairo heat finally broke.  Mamdouh Hamza, Egyptian civil engineer, businessman and longtime government critic, was sitting in a plastic chair in an outdoor café at Tahrir Square, puffing on a water pipe.  The white-haired Hamza was holding court with his cadre of young revolutionaries, to whom he’d become a kind of beneficent godfather.  (My colleague Charlotte and I had met him an hour earlier, having interviewed him for a story on Egyptian agriculture and food issues we’re producing for U.S. public radio (Marketplace) and television.)  Hamza – builder of big Egyptian development projects and nevertheless a longtime critic of the regime – had been trying to keep a dialogue going between the military council and his “kids.”  But recently things had broken down, and that morning at 5, he said, something disturbing and perhaps unrelated happened:  Someone called Hamza to say he’d been hired to kill him.  But the would-be hit man had changed his mind – “I like you,” he told Hamza – and so he gave the blood money back. Or so the story went.  Hamza seemed to think this was all a hoax, designed to rattle him, and he had no plans to heed the reluctant killer’s warning:  that Hamza shouldn’t show up at the square the next day, lest he take a bullet.

Now came Wael Ghonim, he of the social media revolution, with his own followers, to say hello to Hamza.  He engaged the older man about finding common ground with the Islamists.  Charlotte caught the moment on camera – a young man in a purple pinstripe shirt and designer wire-rim glasses, talking to the shaggy haired professor nearly old enough to be his grandfather –  but when Ghonim spotted Charlotte, he insisted she stop shooting.  “If you use this,” he said, “I will sue you.”  It wasn’t that he didn’t want to be seen speaking of reconciliation with the Islamists; rather, a friend reported, he said he didn’t want to be caught on camera being friendly with Hamza, a fellow secularist.  “If you use this, I will sue you,” the Google MBA repeated to Charlotte, a smile frozen onto his face, before moving off with his entourage.

Signs of strains between secular and Islamic forces have been showing for months.  But both sides were expected to be represented in Friday’s mass demonstration.  Hamza predicted between 800,000 and a million people would show up.

At two in the morning we headed back downtown to catch a few hours sleep.  As we climbed into the taxi, the bearded Salafis, bussed in from all over the nation, were pouring single file into the square: a stream of white robes and skullcaps, part of a planned show of force by Islamists.  They would be spending the night in the square, ready with their banners and chants as the sun rose on Cairo three hours later.

By 9 am we were moving down another human river: a crush of people squeezing through a pedestrian corridor near the Kentucky Fried Chicken.  Finally the way opened up, spilling us onto a clearing on the square.  Red and white, and black and white banners, and modified Egyptian flags all carried the scrawled message:  There is one God but God.  Other signs called for the implementation of Sharia law.

“Obviously they are breaking some rules,” said our friend Magdy Kassem, a leftist who recalled the agreement by each member of the fragile revolutionary coalition not to bring potentially divisive rhetoric into Tahrir.  “They had huge discussions during the revolution that such a slogan should not be raised at the square,” in order “to have a common denominator for all political powers.” Now, Magdy said, they had abandoned that promise.  Indeed, Al Ahram Online reported that a coalition of secular movements pulled out of the demonstrations today, citing the Islamists’ refusal to present a united front and to “avoid all controversial points.”  Clearly the “Day of Unity and Popular Will” was not to be.

Volunteers were handing out red and black paper visors with inscriptions of the Muslim alliance.  “This is the biggest show of force for the Muslim coalitions,” Magdy said.  “It’s amazing.  I’ve never seen them that big in the square.”  Here and there, posters of Bin Laden were raised.

Nevertheless, secular voices were heard in large numbers:  Alongside the chants for an Islamic state came calls for democracy, freedom, social justice and accountability. ”Islameya, Islameya” rang out, but so did “Muslim-Christian unity,” and denunciations of Mubarak, U.S. aid, and the Israeli occupation.  Still, the clear force in the square was Islamic.  ”They hijacked the square,” our friend Madiha Kassem, Magdy’s sister, told us.  To this sentiment, ChangeRegimes tweeted:  ”Not sure why they’re so surprised.  Cairo is hardly Paris.”  No, it’s not. But for many here, calling for the “cleansing of the square” is not very Egyptian, either.  And some people here would later say the Islamists’ force in Tahrir may have backfired, sending a chilling image that voters could choose to reject in the coming elections.

We wanted to find Hamza and his entourage – they’d promised to connect us with protestors worried about putting enough food on their table -  but no one was picking up their calls and visual sightings would be hopeless in this crush.  (Later, very much alive and well, he would tell me he receives nearly 60 calls an hour – such is the state of a revolutionary leader – and as he didn’t recognize my number, he didn’t pick up.)

Here and there, young men had shinnied up a poll, perching above the crowds.  We wanted perspective too.  In a building at the edge of the square, we rode an elevator to the 7th floor, and – thanks to Magdi’s graceful negotiations – emerged onto a balcony above the sun-soaked masses.

By now it was time for Friday prayer.  A sea of humanity stretched out below us:  Hundreds of thousands of Egyptians, folding in unison, then rising together, then folding forward again, placing foreheads to the earth.   It was powerful to watch; beautiful.

“God is great,” came a surge of voices.

They retreated like a wave, giving way to another chorus: “Change, freedom, social justice…”