A biologist with a camera, and his quest to document a great annual migration over Palestine. 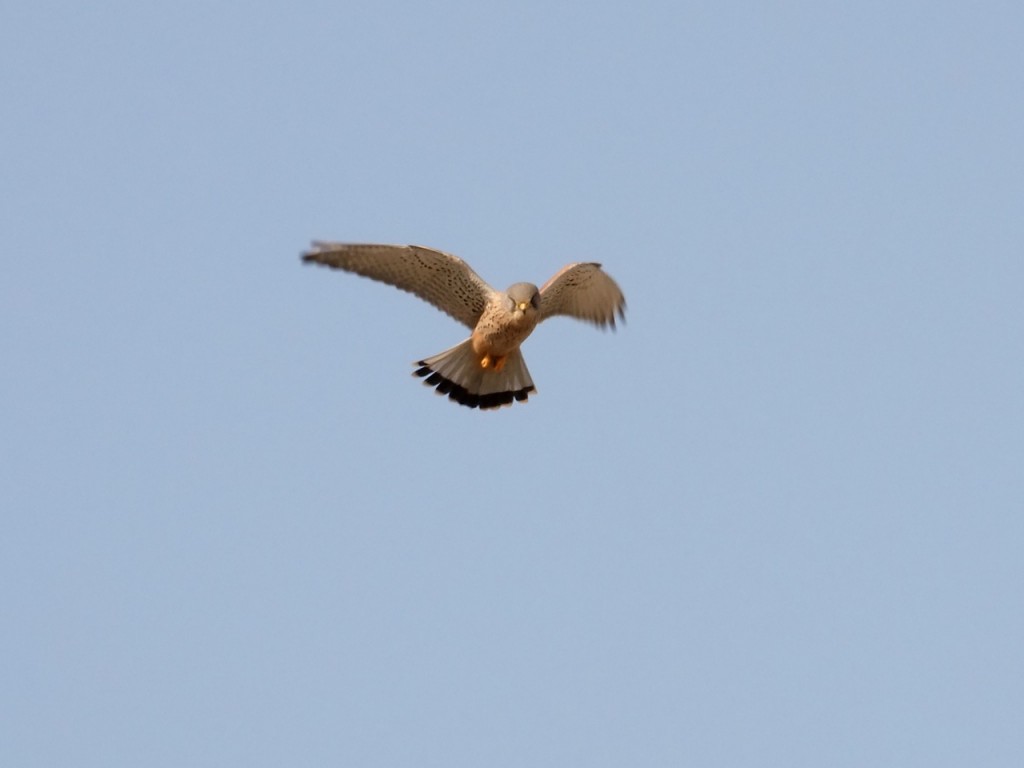 A Kestrel (Falco tinnunculus, from the falcon family), in the sky over Jenin. Photo copyright by Walid Basha. Used with permission.

Say “Jenin” to a friend and ask what word comes to mind.  I’m guessing that word would not be “birdwatcher.”  Unless, perhaps, you’d had the good fortune to meet Walid Salim Basha, microbiologist, university professor, environmentalist, and scientific and photographic observer of the great bird migration over the West Bank, especially in the Jenin governorate. “In the Holy Land, all birds migrating from Europe to Africa avoid passing over the Mediterranean, so they will pass over Palestine – more than 600 million birds will fly over Palestine during the year,” Walid told me as he navigated the crowded streets of Jenin in his old Opel.  We were driving toward his house so he could show me photographs he took of 120 species of  migratory birds in the Jenin mountains.  “This year, over Jenin, I recorded more than 500 kites [a hawk-like bird of prey].  You have the white stork – we have thousands in Jenin, in the valley between Jenin and Nablus.”

I’d met Walid only a few minutes earlier, at the Al Kamandjati music center in Jenin, where his 11-year-old son Fadi is taking singing lessons with the British soprano, Julia Katarina.  (My new book is about Al Kamandjati and the transformational power of music in the lives of children.)  Fadi, who at this stage in life is also a soprano, has a strikingly powerful, clear voice, and was preparing for a performance of Italian arias for the Italian consulate in Bethlehem in a few days’ time.  (Right; of course he was.)  While Julia went upstairs to work with Fadi, Walid happened to mention his passion for birds, and soon he was inviting me back to the house to see the photos.

“Tell Julia I’ve kidnapped him,” Walid told Al Kamandjati staffer Reema Shriem, as we headed out the door.  I raised my eyebrows.  “In Jenin,” I said.

“I’m not a political guy,” said the professor of immunology and microbiology at An-Najah University in nearby Nablus, as we drove toward his house.  “I love my science.  I love my work.”  Walid began his bird documentation not to seek or fulfill a grant project for an NGO – but just because he wanted to.  “I believe in the NGIs,” he said.  “Non-governmental individuals.  We can do projects.”

We were stuck in traffic, and horns began blasting near the vegetable market in Old Jenin.  “This is an Arabic tradition,” Walid said, laughing.  “I was in Japan for six years” – working on his PhD and raising a family with his wife, Jameleh.  “Fadikon” was born there and holds a Japanese passport.  “In Japan we don’t use the horn.  Not once in six years.  Everything is going smoothly.  No noise.  Nobody steps in the street.  When I came back here, in one day, I used it thousands of times!”

We rounded a corner as the muezzin was giving his call to prayer.  Walid’s family is among only 400 Christians in Jenin, a town (and refugee camp) of more than 50,000.   But he said the distinctions between Muslims and Christians are “meaningless, here in Jenin.”  As a Christian schoolboy, Walid was not required to take Islamic studies as other students were.  “But my dad emphasized that we should take these courses because we should know about our neighbors. It gives you more to understand the others.  In general we don’t have any problems as Christians.  We respect each other.”

Now we arrived at the house, and Walid ran in to retrieve his camera, where he’s stored hundreds of close-ups of migratory and local birds:  Jays, robins, blackbirds, buzzards, owls; Turtle Dove, Palm Dove, Syrian Woodpecker, Yellow-vented Bulbul, Black Redstart, Stonechat, Chucker, Short-toed Eagle.  “This is the white-chested kingfisher,” he said upon returning to the car, showing me the little screen on his Fuji.  The bird sat on an electrical wire, a large lizard dangling from its beak.  “And I was watching him enter the nest and give it to the babies.”

Bird on a wire: The White-breasted Kingfisher (Halcyon smyrnensis), and dinner for the family, on an electrical wire in Jenin. Photo copyright by Walid Basha. Used with permission.

“This is the Palestine Sunbird [Nectarina osea].  It’s black, but after the sunrise, it will become more blue, sometimes green, depending on the reflection of the light.  It’s in an olive tree next to my house.” 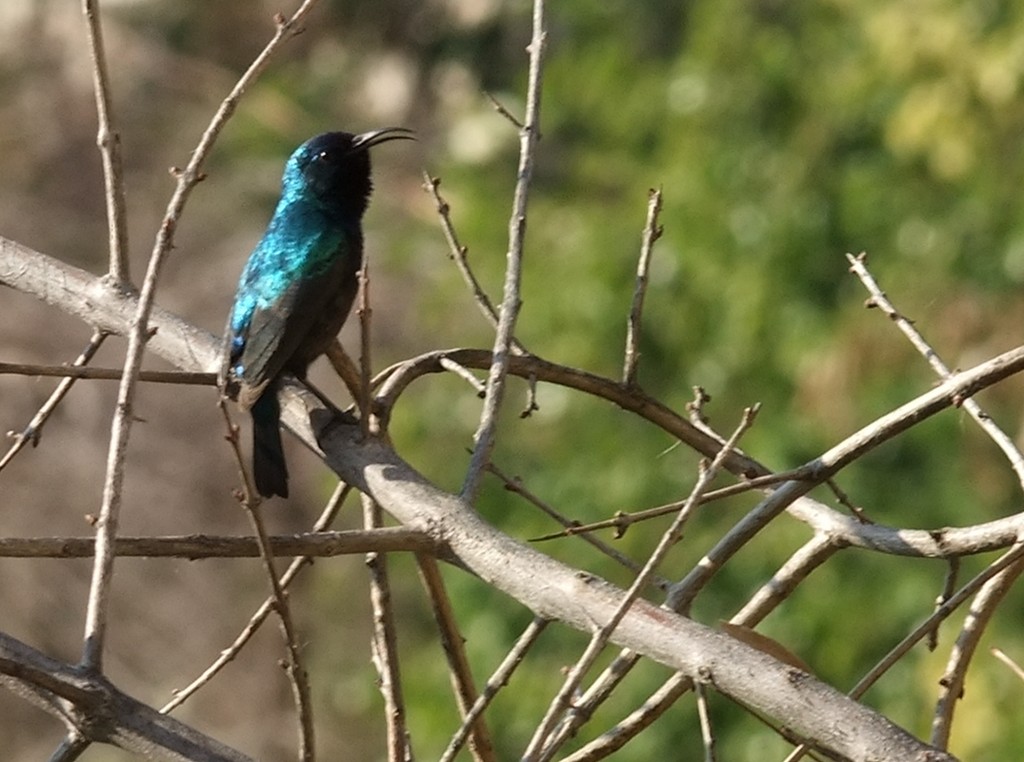 A Palestine Sunbird (Nectarina osea), iridescent blue in this photograph, perched in an fig tree in Jenin. Photo copyright by Walid Basha. Used with permission.

He clicks forward.  “And this is the white dove, migratory – it comes to Palestine in springtime.”  The picture shows two doves together. “You know that if one of the couple dies, it will not marry again?  It will spend all the life with one – they are not changing couples every year, like other birds.” 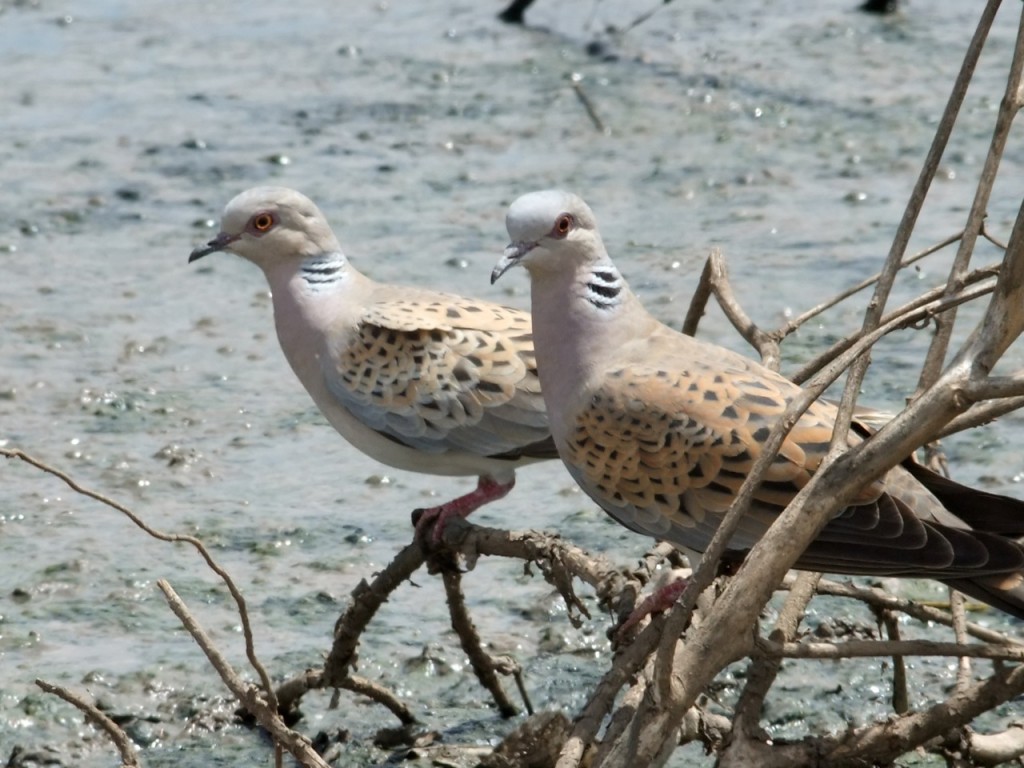 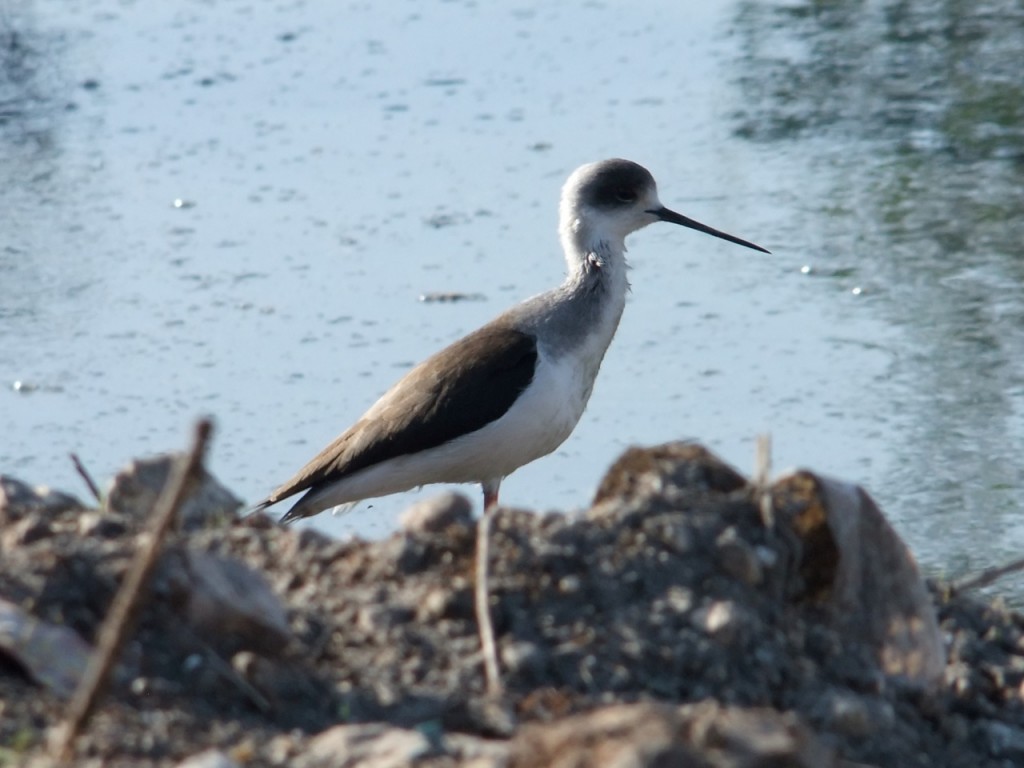 A Black-winged Stilt (Himantopus himantopus) outside of Jenin. This is one of 120 species of migratory birds documented by Prof. Walid Salim Basha. Photo copyright by Walid Basha. Used with permission.

A couple of weeks later, my friend Nidal and I paid Walid and his family another visit.  We sat on their comfortable third floor veranda, sipping tea. Fadi’s performance in front of the Italians in Bethlehem had been a big hit – so impressive that, after the performance, the diplomats began gushing to him in Italian, leaving it to Fadi’s uncle to break the news:  Fadi may be able to beautifully sing Italian arias in a barely detectable accent, but he doesn’t speak the language.

As we spoke, Walid pulled out a royal blue sheet of origami paper and began making folds.  He described the recent visit of the Japanese ambassador, who he showed all around Jenin.  He was fond of escorting one recent Japanese diplomat, a fellow Catholic, to holy sites in the area, including the Church of the Nativity in Bethlehem, where they attended midnight and Easter masses.

Walid’s fingers worked the folds of his origami.  He was making a crane.  “There is a tradition in Japan – if you do 1000 cranes, all of your dreams will come true.”  Suddenly he said:  “In Japan, we used to go fishing.  I miss fishing a lot.  I hope they open Gaza so I can go there.”  Lately, moving around has become increasingly problematic.  In 1993, at the start of the Oslo “peace process,” he would travel from the West Bank to Haifa without problem.  “Now I need a permit and a magnetic card. If you want to cross the border, you will take hours just to make your decision.”  Jameleh suggested Walid’s love for birds, especially those in flight, has a deeper meaning.

Walid returned his attention to his crane.  Today the bird man of Jenin gives workshops on origami to kindergarten teachers here.  He tells them of the promise of 1000 cranes. After the atomic bomb was dropped on Hiroshima, he said, a young girl with leukemia tried to make 1000 cranes, in a dream to save her own life.  She got as far as 680; after her death, her friends and family finished the job.  Today, Walid is organizing a 1000 cranes project at Fadi’s school.  “We will collect the 1000 cranes, and send them to Japan,” he said.

Now he is finished with the blue crane.  It’s simple and beautiful.  Walid smiles, and reaches out, crane between his fingers, to offer it to Nidal.