On the 44th anniversary of the first day of the Six Day War and the beginning of Israel’s occupation of the West Bank, Maddalena Pastorelli made plans to teach her regular music appreciation class to Palestinian children at the Qalandia refugee camp.  Under the circumstances – Palestinian youth groups were calling for a mass nonviolent march to the Israeli’s Qalandia checkpoint, alongside its 25-foot-high wall, and Israeli troops were mobilizing – it was an ambitious goal. 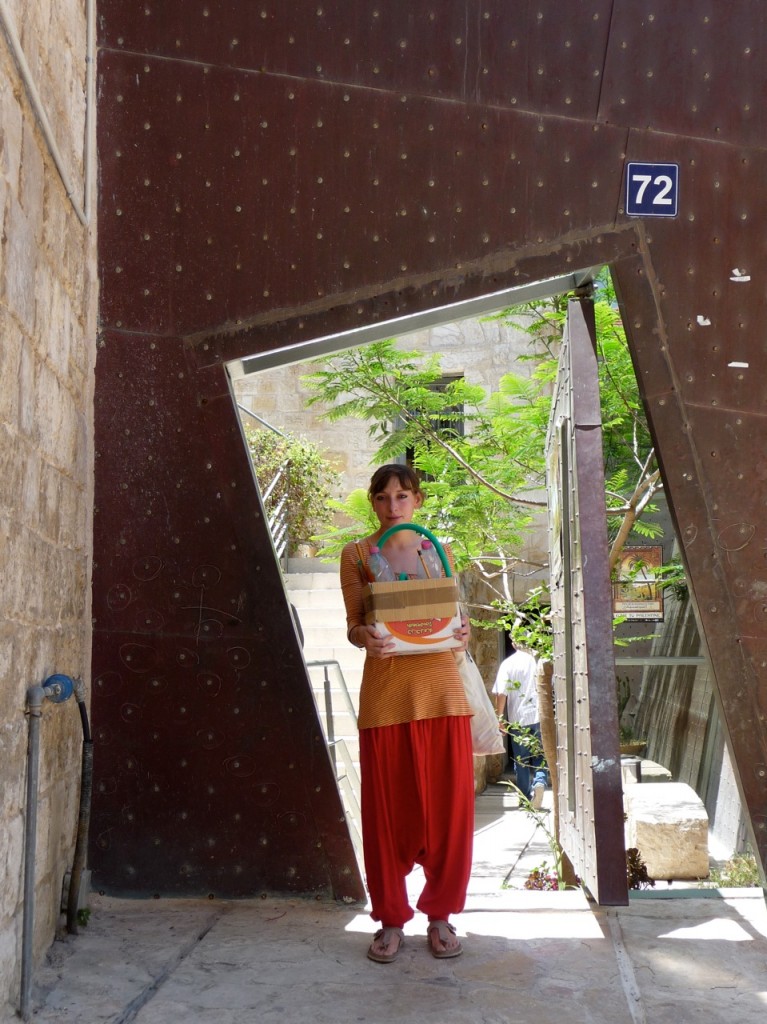 Maddalena Pastorelli, a teacher at Al Kamandjati (The Violinist) in Ramallah, with her box of homemade musical instruments to share with the children of Qalandia refugee camp.

Nevertheless, we set out in a white van in the late morning, Maddalena accompanied by two of her colleagues in the Al Kamandjati music school. At her feet was a cardboard box full of simple instruments: a tambourine, a triangle, small plastic sheets to make rattling sounds, a piece of plastic garden hose to evoke the sound of the wind, and plastic jugs filled with chickpeas, orange lentils, and rice. “The rice is the best for the rain,” Maddalena declared.

Maddalena, a flautist who studied in Sienna, Italy, was planning to hand out the instruments to the children for a small drama at the U.N. school in Qalandia camp. “It’s the story about a goat that lives in the forest, and she has a little baby, and she has to go to find some grass every morning, so she leaves the baby alone at home,” explained Maddalena as we rattled down the Ramallah-Jerusalem road, flashing past the Arabic sweet shops, half-built apartment buildings, auto repair garages and 10-year-old street peddlers hawking gum and boxes of tissue. “And the baby is always scared because there is the wind. And she says, No, this is just the sound of the wind, don’t be scared.”

Ten minutes out of Ramallah, as we approached Qalandia, a thick plume of black smoke rose in the sky, maybe half a mile to the south, near the wall and the Qalandia checkpoint. We could hear muffled explosions in the distance. The sound of ambulances grew near. Maddalena let out a moan, and for a moment, put her face in her hands. Iyad Jaradat, a Kamandjati teacher, took a call as he maneuvered the van 90 degrees to the left, toward the school at Qalandia Camp. “It’s finished,” he announced. Children at the U.N. school were being sent home; there would be no music class today.

Nevertheless, we parked, got out of the van, and began walking toward the school, as dozens of kids in their blue and white pinstripe uniforms streamed in the other direction, toward their homes in the camp. Iyad still needed to distribute posters and calendars announcing Kamandjati’s coming Fête de la musique (Music Days Festival), which will include performances at Qalandia and across the West Bank by students and teachers from Palestine, the U.S. and Europe. In a few days, 15 musicians will arrive from France, the U.K. and elsewhere to play the concerts, and to teach in the Kamandjati summer music camp near Bethlehem.

We walked through a nearly empty cement playground, hot and baked white from the sun. Maddalena clutched a roll of “Come to Palestine” posters, announcing the festival. The explosions just south of us, on the frontlines at the checkpoint, had died down, at least temporarily, though the whine of the sirens was more or less continuous. Iyad went to hand out programs to teachers in another part of the U.N. school, and came back to announce that the school’s theater had been converted to a triage center for youths injured in today’s clashes.

Later, we would learn, dozens of Palestinians were injured – 90, by one account – in the clashes at Qalandia, which according to reports began as protestors tried to form a human chain at the checkpoint, and, were met with tear gas and sound bombs from Israeli soldiers. Youths later began throwing rocks, amid reports in the evening that Israeli forces were attempting to storm Qalandia camp.

That afternoon, back in the van and the relative safety alongside the U.N. school at Qalandia,, Maddalena looked down at her feet and the unused box of homemade instruments. Next week, she said, there will be one last chance, before the summer break, for the children to perform their musical drama. She wouldn’t tell me the end of the story. “It’s a surprise,” said Maddalena.

We turned around and headed back toward Ramallah.