How did you develop your original interest in the Israeli-Palestinian conflict?
Throughout my career, I have been drawn to international stories about the intersection of land, natural resources, indigenous and cultural identity. I had always been interested in covering such issues in Israel and Palestine. Like many Americans, Jew and Gentile alike, I was raised with the story of the heroic birth of Israel out of the ashes of the Holocaust but had come to understand that there was another people’s story in the Holy Land, too. After marrying a Palestinian journalist whom I met on a journalism fellowship at Harvard (we were married for eight years), I began traveling to the region extensively to explore the different narratives of history, identity, war, and peace, throughout Israel, the West Bank, and Gaza. This resulted first in a series of reports for National Public Radio (NPR) about water in the Holy Land, and then my 1996 book, The Lemon Tree: An Arab, a Jew, and the Heart of the Middle East.

What about Ramzi Hussein Aburedwan first caught your attention when you met him in 1998? 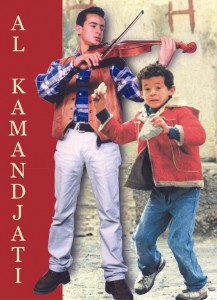 I first saw Ramzi on a poster that was pasted up all over Ramallah as I was researching The Lemon Tree. One image showed eight-year-old Ramzi, in 1987, throwing a stone at an unseen Israeli soldier. Beside that, on the same poster, was another image, from 1997, of 18-year-old Ramzi playing the viola. The poster was a promotion for the Palestine National Conservatory of Music, but also in essence for the hope many people had at that time that a free and independent state of Palestine would coexist, side-by-side in peace, with Israel. I was inspired to find Ramzi at the refugee camp near Ramallah where he lived with his impoverished grandparents. Once there, as I began working on a piece that would air on NPR, what caught my attention was Ramzi’s spirit—his charisma, determination, will, and the light in his eyes, despite all the loss he had suffered, to not only play music but to create music schools for Palestinian children. This, from an 18-year-old with no financial resources who had just begun to play music.