ONE EVENING in July of 2014, near the beginning of Israel’s assault on the Gaza Strip, several dozen Israelis pulled up couches and plastic chairs to a nearby hilltop to watch the spectacle. Some munched popcorn. Suddenly, there on the outskirts of the Israeli town of Sderot, a flash lit up the night sky, followed by a column of fire and an earth-shaking roar. As the missiles from Israeli fighter jets rained down on Gaza, the crowd broke into cheers and applause. 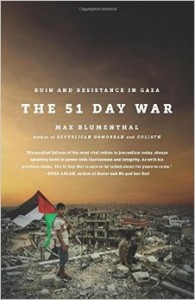 One of those missiles, from an American-made F-16 fighter, crashed through the Fun Time Beach Café in Gaza, killing nine young men, also in plastic chairs, gathered to watch the World Cup on television. They would be among the early victims of a 51-day war that claimed the lives of nearly1,500 civilians, including 521 children, and badly damaged or destroyed 18,000 buildings, including schools, hospitals, the Gaza Power Plant, water and waste water infrastructure, and more than 400 businesses.
Click here to read the full review.