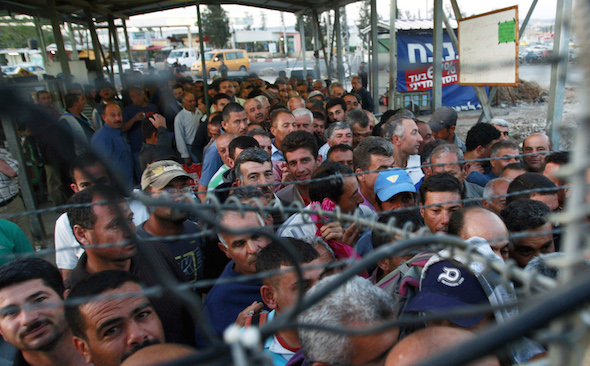 Palestinian workers wait to cross at the Israeli checkpoint in Jalameh, south of the West Bank city of Jenin, on their way to work in Israel. (Mohammed Ballas / AP)

by Sandy Tolan on TruthDig

For years the “A-word” has been off-limits in polite conversation about Israel’s treatment of Palestinians. The A-word, we have been told, unfairly singles out the Jewish state and its use is perhaps even anti-Semitic. Such declarations can have a powerful silencing effect.

However, in 2002 Archbishop Desmond Tutu broke the taboo, writing in the British newspaper The Guardian that “the humiliation of Palestinians at checkpoints and roadblocks” reminded him “of what happened to us black people in South Africa.”

Four years later Jimmy Carter committed a similar indelicacy with the very title of his bestseller, “Palestine: Peace Not Apartheid.” A wave of condemnation of the former president followed. “He appears to be giving aid and comfort to the new anti-Semites,” wrote a reviewer for the Jewish Virtual Library.

For the most part, in the mainstream U.S. press at least, the decorum that forbids use of the A-word remains in place. Yet increasingly, as Israel continues to colonize the West Bank with settlers, and its army ensures their dominion over the lands they occupy, adhering to the A-word ban requires shielding one’s eyes, or, at a minimum, engaging in verbal gymnastics. What, after all, to call a system of legalized discrimination based on ethnicity and religion in which one group has full voting rights and the other does not?